In 1996, during sessions for their third album, Radiohead recorded a track called Lift. Like much of their new material, it had first been performed during a disastrous American tour that same year, supporting Alanis Morissette. But unlike the other new songs Radiohead had played, Lift had gone down well. Listening to it on the 20th anniversary reissue of OK Computer, you can see why: it is blessed with an immense, air-punch-inducing chorus. The thing is, Lift is on the second disc, the one filled with B-sides and outtakes. Knowing they had a huge, self-evident hit on their hands, Radiohead deliberately left it off the album they were making.

Such was the curious, peevish atmosphere in which OK Computer was created. Since its release, it has been held up as a game-changing state-of-the-world address, a critique of globalisation and consumerism. An album created in a world where the internet had yet to take off, it eerily prefigured the themes of alienation and information overload that everyone would start discussing the minute it did. But its origins are substantially more prosaic: OK Computer feels like a reaction to the band’s experience of promoting its predecessor, 1995’s The Bends. Indeed, it may be history’s most brilliantly disguised example of an old musical tradition: the successful rock band moaning about the day-to-day business of being in a successful rock band. For all the camouflage – the lyrics are elliptical enough to make scrolling through the various interpretations online a matter of days rather than hours – its roots keep showing through. The opening of Let Down reads suspiciously like a retelling of the Morissette support-slot imbroglio. The ingratiating glad-handing depicted in Electioneering; the longing for suburban normality on No Surprises; the fretful obsession with travel, underlined by the sound of an airport tannoy on B-side A Reminder; the cast of ghastly, coke-fuelled characters on Karma Police and Paranoid Android: all of it feels like the product of months spent traipsing around the midwest. Even the lyrical tone of overheated chippiness (“We hope you choke”; “When I am king you will be first against the wall”) seems to speak of endless hours cooped up on a tour bus, endlessly picking things over in your mindless hours cooped up on a tour bus, endlessly picking things over in your mind. 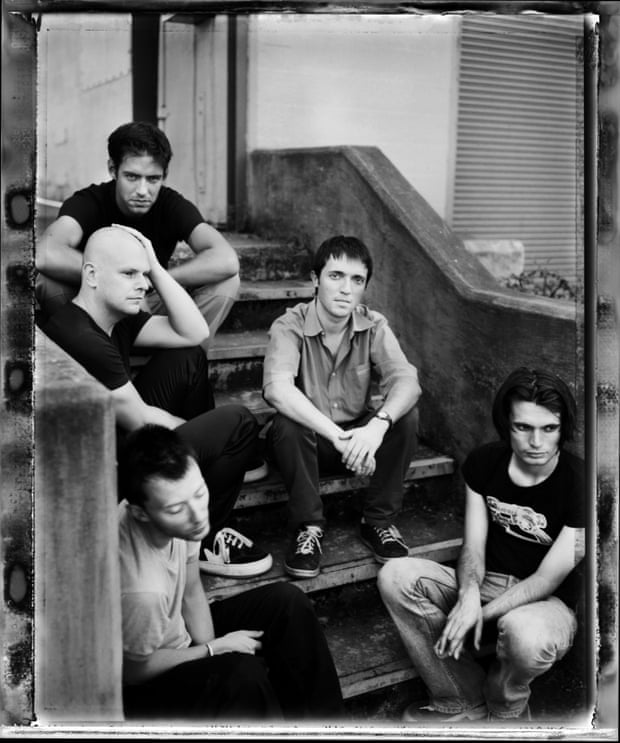 The fact that OK Computer continues to feel like substantially more than rock stars moaning about being rock stars has as much to do with the music as Yorke’s lyrical ability to turn his personal bugbears into something more universal. OK Computer was thick with memorable tunes, and a few songs as straightforwardly beautiful as Lift slipped through the net, not least Let Down. But in an era when their peers were striving for uncomplicated mass appeal, OK Computer was dense and clotted and experimental. Stuffed with knotty guitar riffs, shifts in tempo, clashing time signatures, bursts of fuzzy electronics, percussive clatter and Mellotron strings, its sound appears to be as much about information overload as its lyrics. There’s a lot going on at any given point: even the robot-voiced interlude Fitter Happier arrives augmented with studio chatter, strings, feedback and a mournful piano backing that sounds not unlike Sonic Youth’s Providence. Indeed, for all that it seemed fresh and brainy in the teeth of Britpop’s lowest-common-denominator pandering, OK Computer wasn’t without precedent. You can hear the Pixies in Electioneering’s distorted white-knuckle din. While Radiohead were apparently irked by being described as prog rock, when confronted by, say, Paranoid Android – six and a half minutes long, in four episodic parts with a section in 7/8 time and a title inspired by a sci-fi novel, which began life clocking in at more than 14 minutes, replete with a lengthy Pink-Floyd-esque organ solo – the desire to call a spade a spade becomes overwhelming.

Prog or not, it proved hugely influential, and not just on Muse, who built an entire career on the moment 2min 45sec into Paranoid Android, when the distorted guitar riff kicks in. It says something about the length of the shadow OK Computer cast over subsequent rock that one track from the reissue’s bonus disc, I Promise, has been playlisted on Radio 2 and 6Music as if it were a new single ; 20 years old, it doesn’t sound out of place amid the latest releases by Grizzly Bear, Alvvays and the National.

But, at least initially, the influence OK Computer had was slightly different from the one its makers might have hoped for. Subsequent artists alighted not on its experimentation, but its doleful don’t-get-your-hopes-up tone; the octave leaps in Thom Yorke’s vocals, rather than his elliptical, political lyrics; not the thrillingly chaotic sound of Electioneering, but the mid-tempo piano-led chug of No Surprises. Worse, they blended these with the music you suspect Radiohead saw as OK Computer’s diametric opposite, the plodding, scarf-waving, Hey-Jude-aping balladry of Oasis’s Don’t Look Back in Anger – here was the cocktail that gave the world Coldplay, Keane, even James Blunt. What no one, including Radiohead, did was make another album that really sounds like OK Computer. Which is another reason why it doesn’t appear to have dated at all.