From stars and politicians on stage to capturing some of the festival’s more unusual characters, Guardian photographer David Levene explains the art of taking the perfect Glastonbury photo 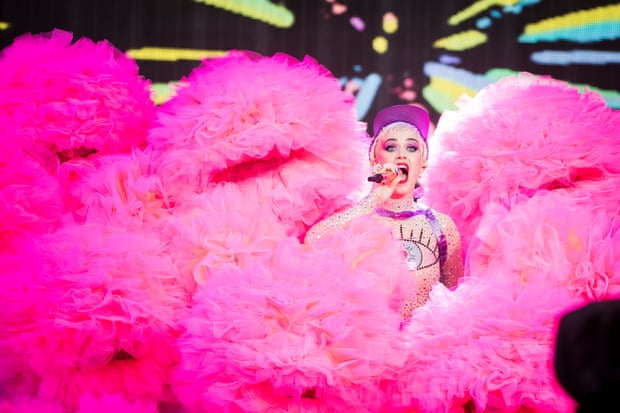 This Katy Perry photograph was a glimpsed moment, as she emerged from all that pink. Most of the rest of the time during her set Katy would be dancing around in full view – this was a great capture because she suddenly emerged as I was focussed on the area of pink. The explosion of colour works so well, and she’s got a great expression too. We had to crop down here to remove some unwanted detail on the bottom of the frame, it’s always hard to get the perfect shot in the moment. 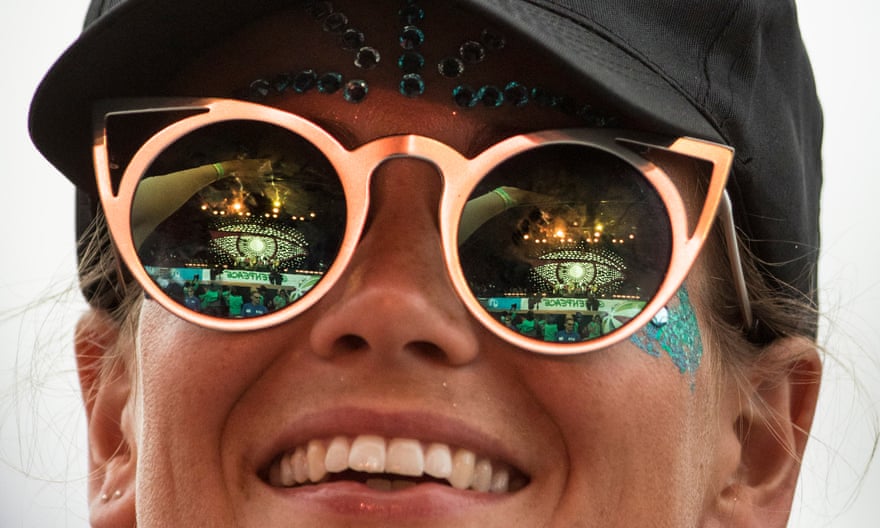 I used my longest zoom lens here - 200mm to 400mm which is the perfect lens to use at the Pyramid stage at Glastonbury. It allows me to get really close up to someone in the crowd, or on stage. There was a bit of luck here too – getting the eyeball shapes on the lenses was something I didn’t plan for! 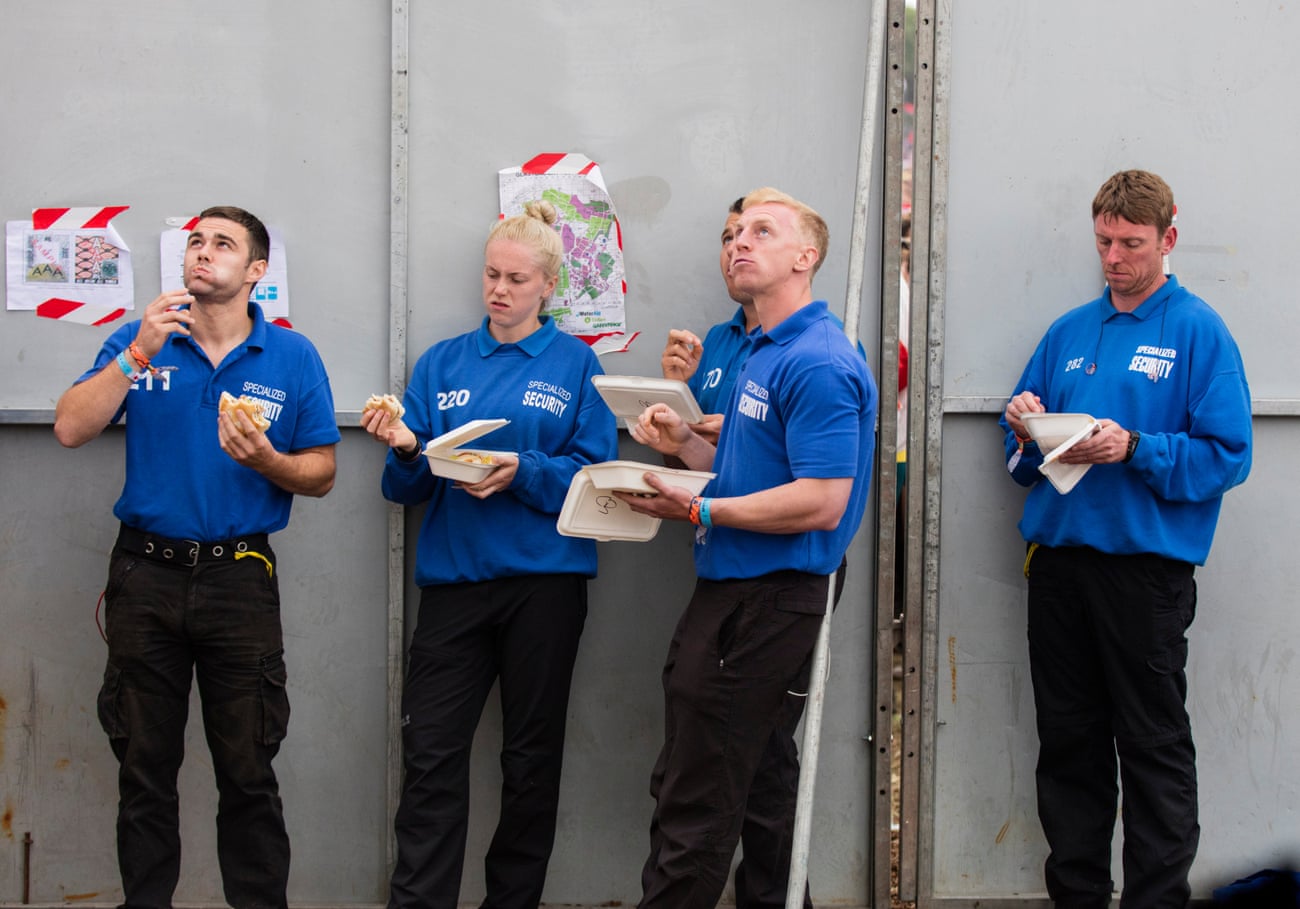 Just as I was leaving Katy Perry all the security guards were eating, it’s a nice moment to get something different – the best part is the woman whose face suggests she’s eating something horrible. 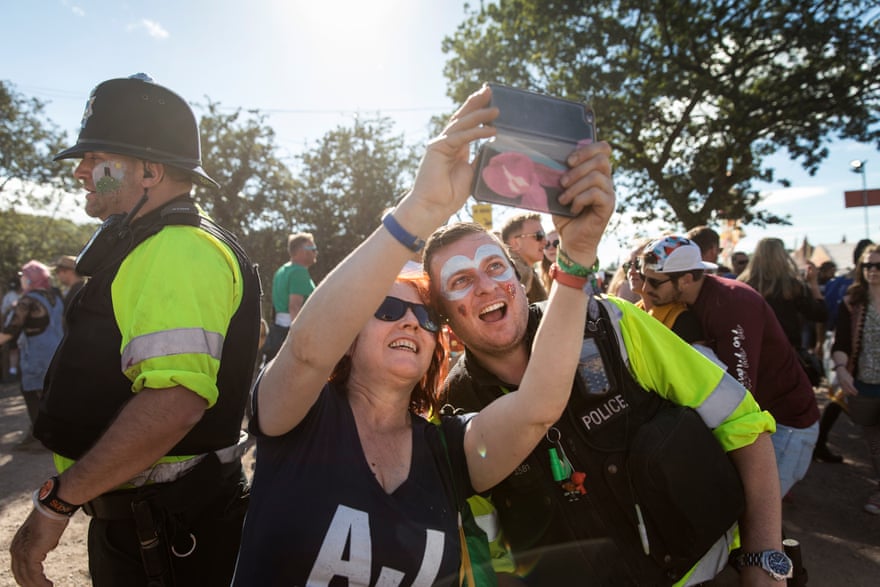 A police selfie: you can’t turn down the opportunity to shoot a policeman with glitter on their face. Glastonbury is probably the only place where you’ll see a policeman looking so relaxed. 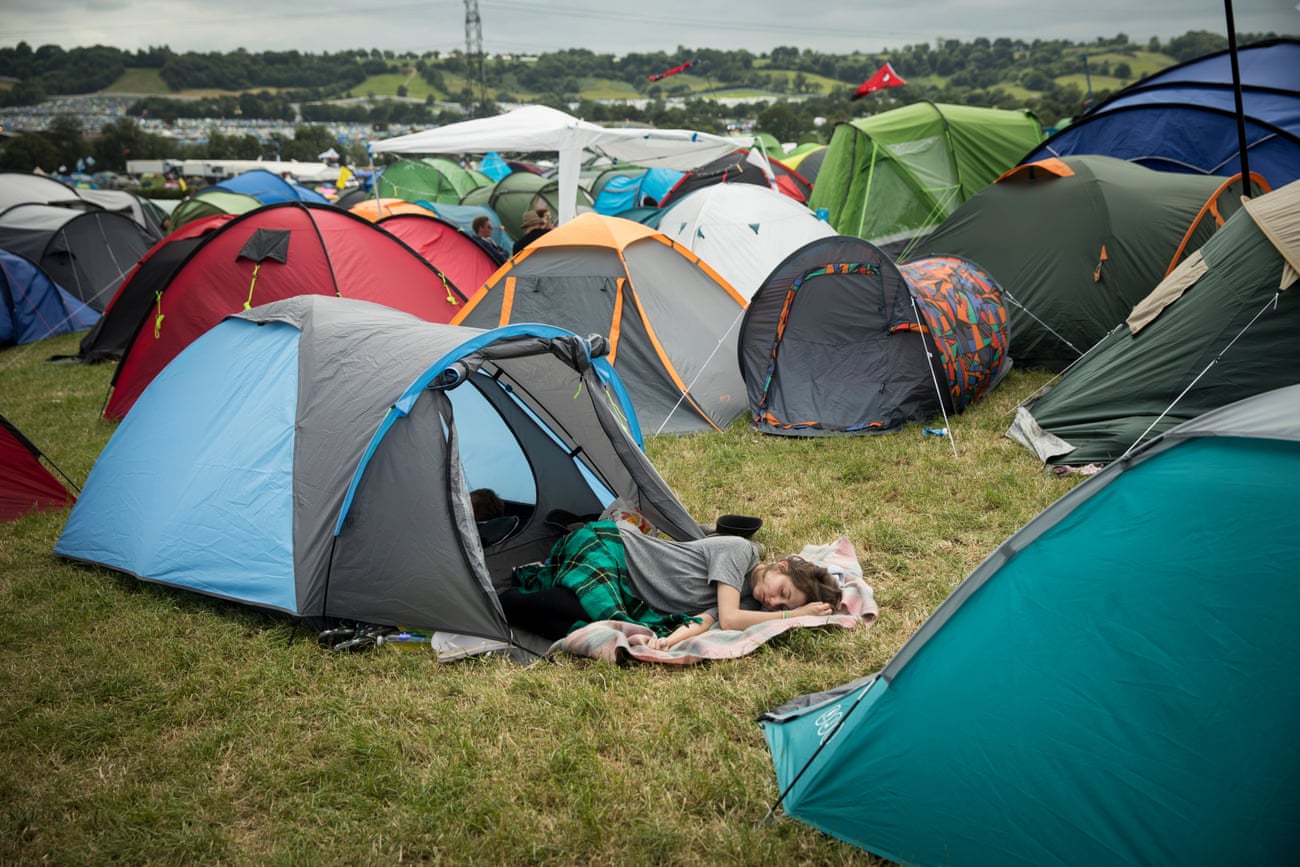 I think there is a level of responsibility to not exploit people – in their tents, scantily clad, or intoxicated. This image isn’t too bad I think – she’s obviously just taking advantage of the cloudy day to get a good sleep in the fresh air. 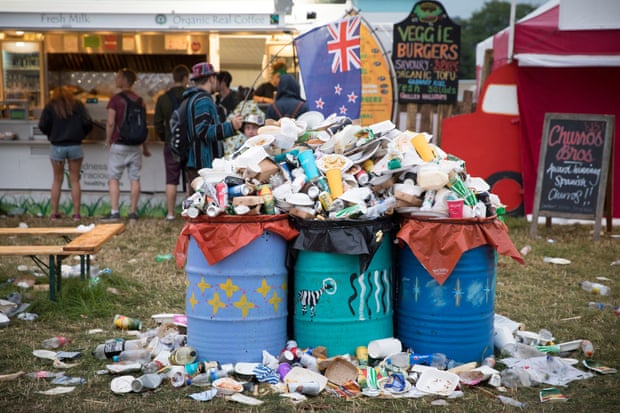 This was around six in the morning, I enjoyed shooting bin still life photographs for a while. They really are amazing. It’s like a sculpture that people have carefully grown into one super bin. Every bin is completely overflowing at that time of morning. 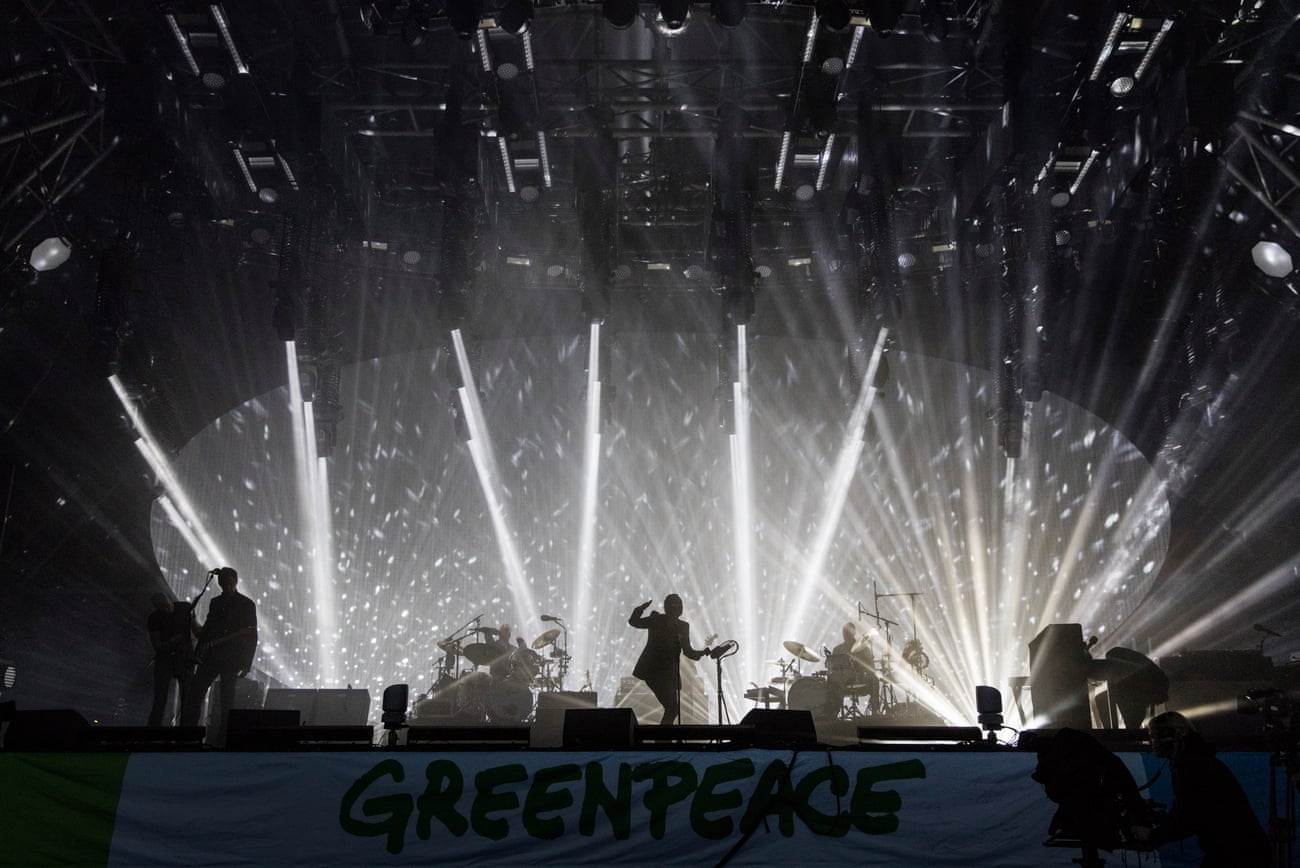 On the biggest stage you take your big lenses, but also wide-angles. You’ve got to be ready for set changes. If you don’t keep an eye on what’s happening you can miss something. I knew this nice silhouette would be the shot when I saw it – Thom looked so dramatic. You’ve only got three songs when a band is playing, so it’s about recognizing when something good is happening and going with it regardless of the pressure. 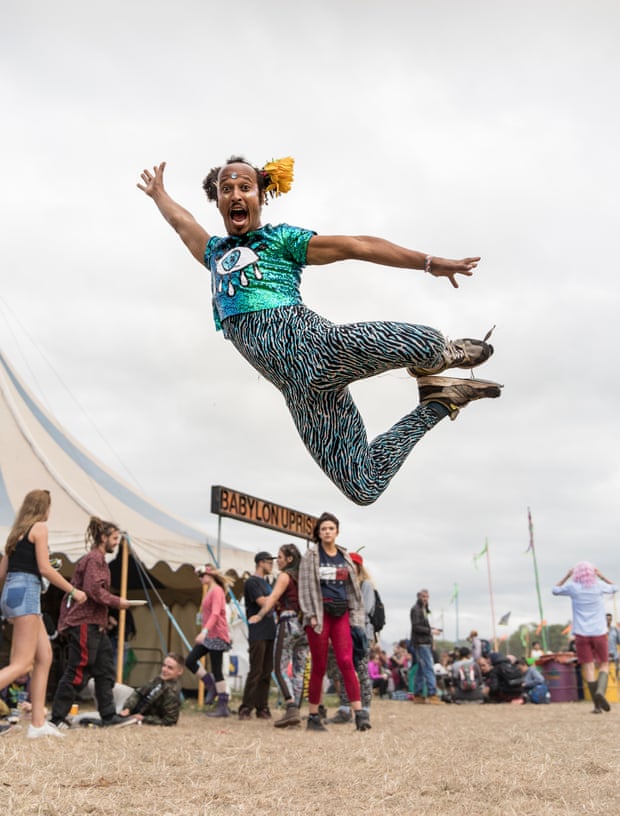 The Disco Bunny: he dresses like this year round, not just at Glastonbury. We had a brief to get four portraits a day to feed into the live blog. So you’re trying to find more unique people in the crowd – and he jumped out at me (literally!). I made him do this leap six times before we got it just right – it was all about getting him clean against the sky, bringing him closer and closer to the camera before he was almost leaping on top of me. 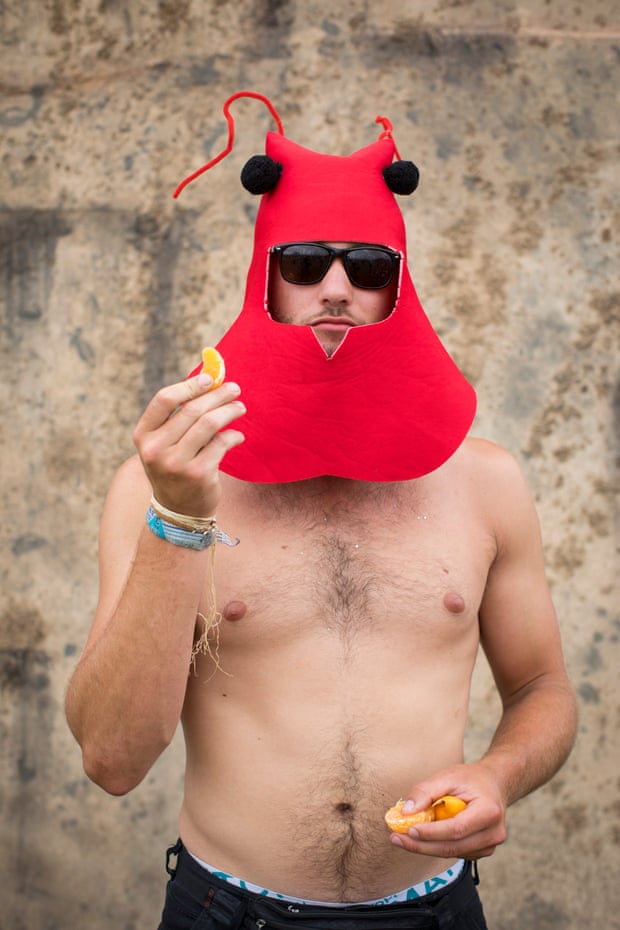 He described himself as a lobster or some other kind of crustacean. 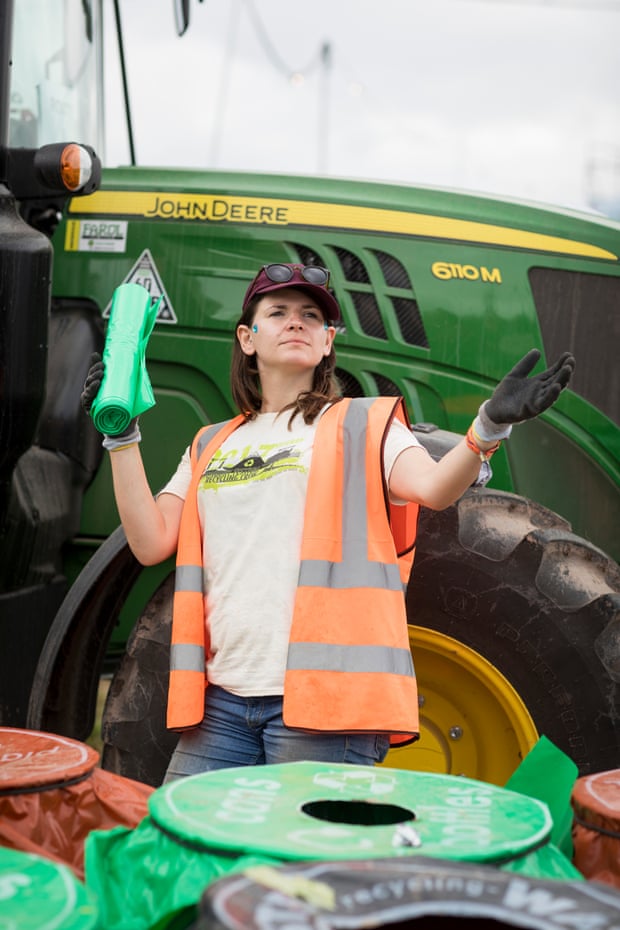 It’s always nice to show a different side of the festival, here’s someone involved in the workings. 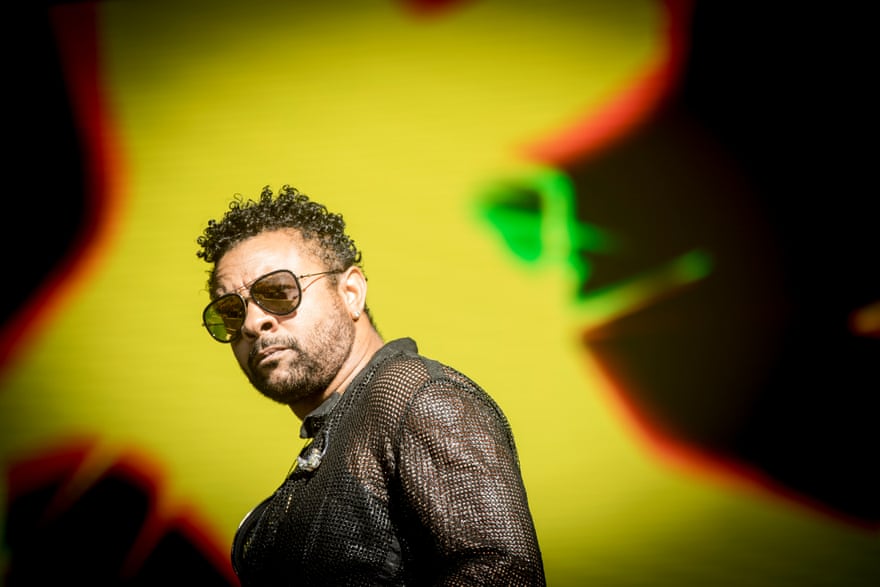 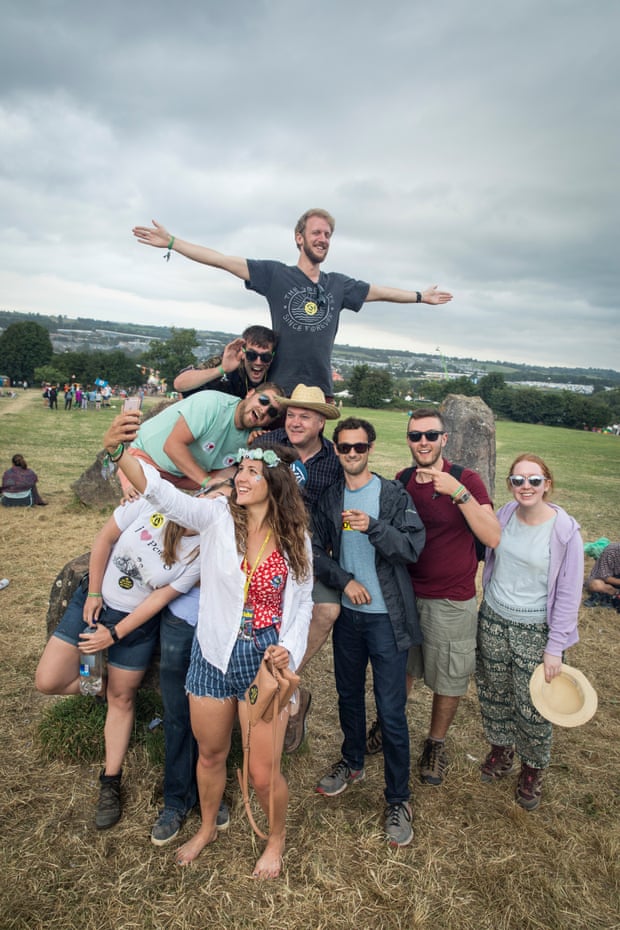 We were following Ed Balls around for the main G2 feature – photographing him getting selfies as a way to tell the story visually. We spent two hours walking around and had to work out the best way to make the things happen that we wanted for our pictures. Ed said that if he took his sunglasses and hat off people would come up to him more naturally – which they did, culminating in our big selfie up by the Stone Circle. 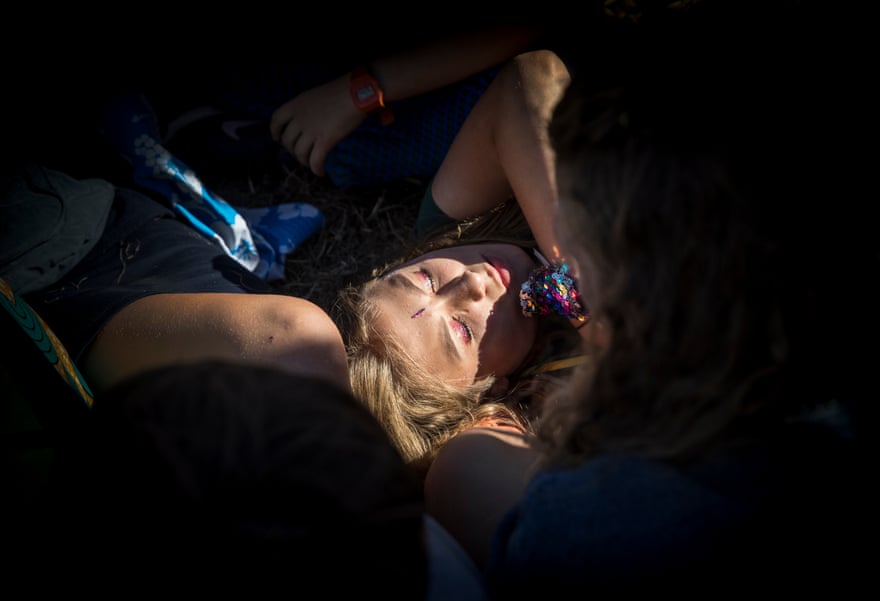 Asleep in the sun, with a tiny shaft of light keeping her face warm. It was a really contrasty scene but works to add some atmosphere to the photograph. Like the bins, I suddenly started seeing people asleep in the sun everywhere which I thought would make a nice series. 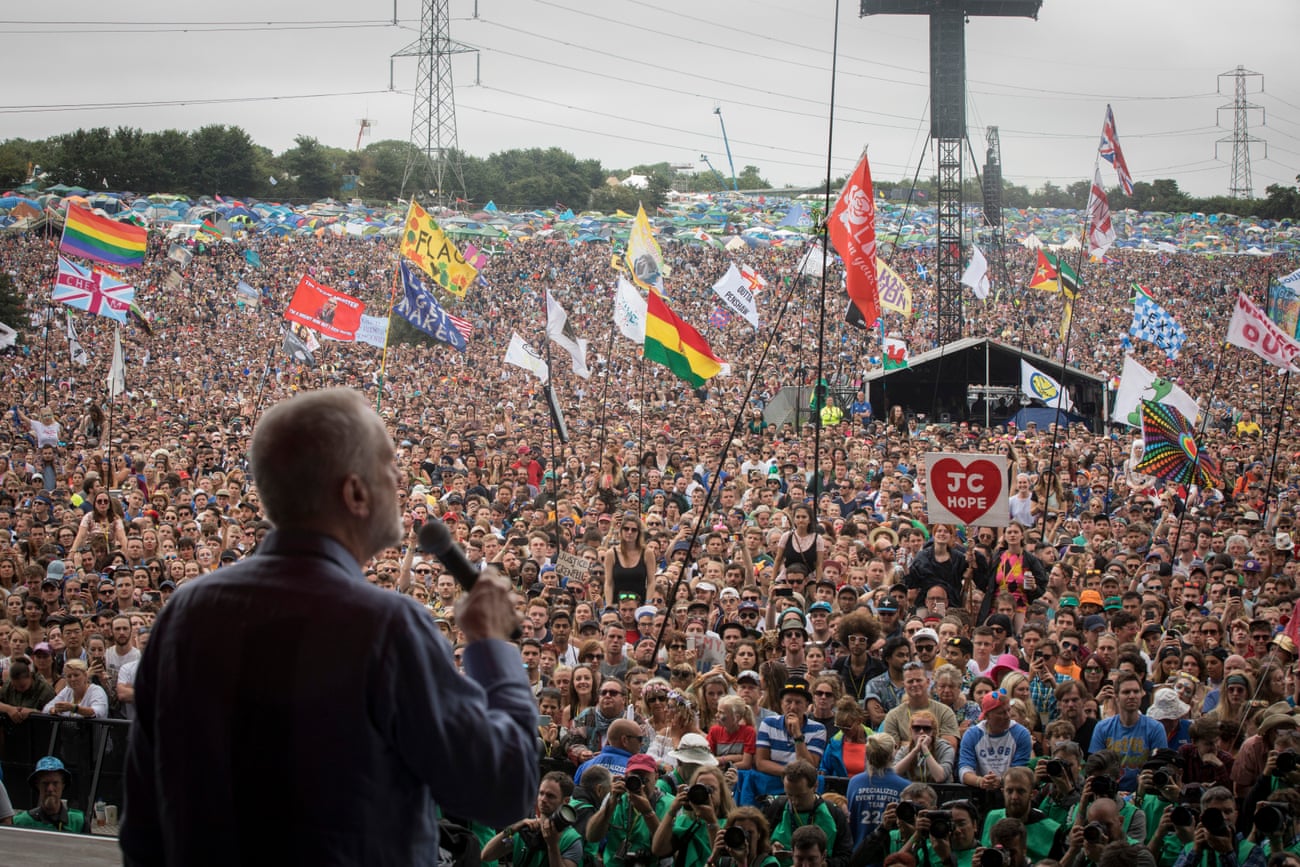 Photographing Corbyn was probably the biggest responsibility I felt whilst working at Glastonbury this year. I was the only news photographer allowed on stage so I knew I could get exclusive pictures and didn’t want to mess up the opportunity! I didn’t want to get in the way of other photographers or cameramen, but I wanted to get in as close as I could to make intimate photographs. I like this one in particular because the crowd are all in focus – the “JC hope” sign in particular. A huge captive audience, it’s amazing – such a lot of people. I’m really lucky to get that kind of stage access – there’s just so much more drama in the moment. 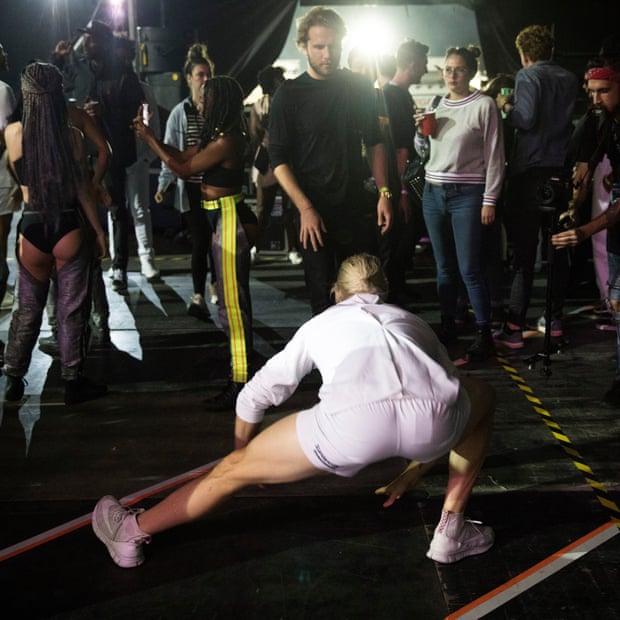 This is Diplo with Major Lazer, doing some stretches just before he went on stage. I didn’t even realise it was him at the time (I had to check online when I got back to edit the images), I just thought it was an interesting moment of someone preparing for the show. 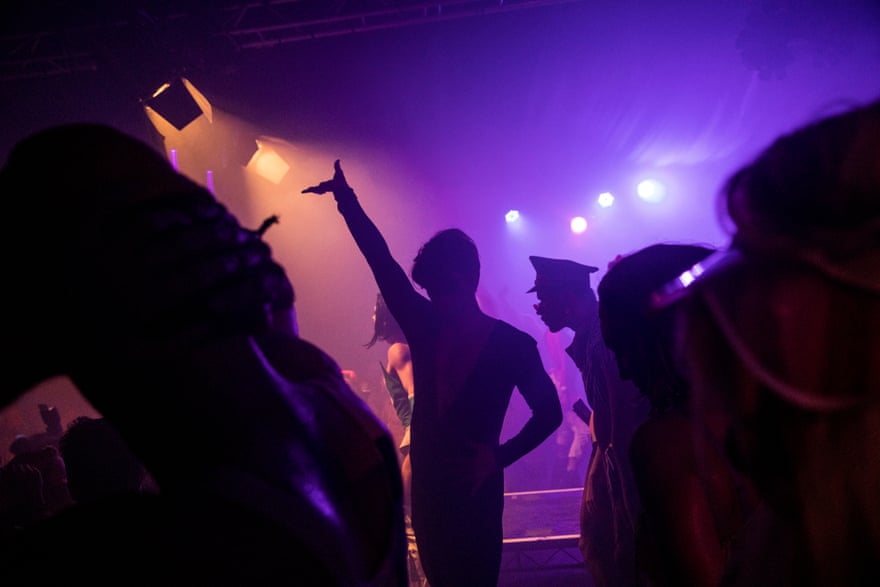 Very late night at Block 9. It’s very difficult to shoot in there – it’s hot and smoky, I had to keep wiping my lenses because of the condensation after coming in from the cold. Still managed to get a couple of frames that worked OK. 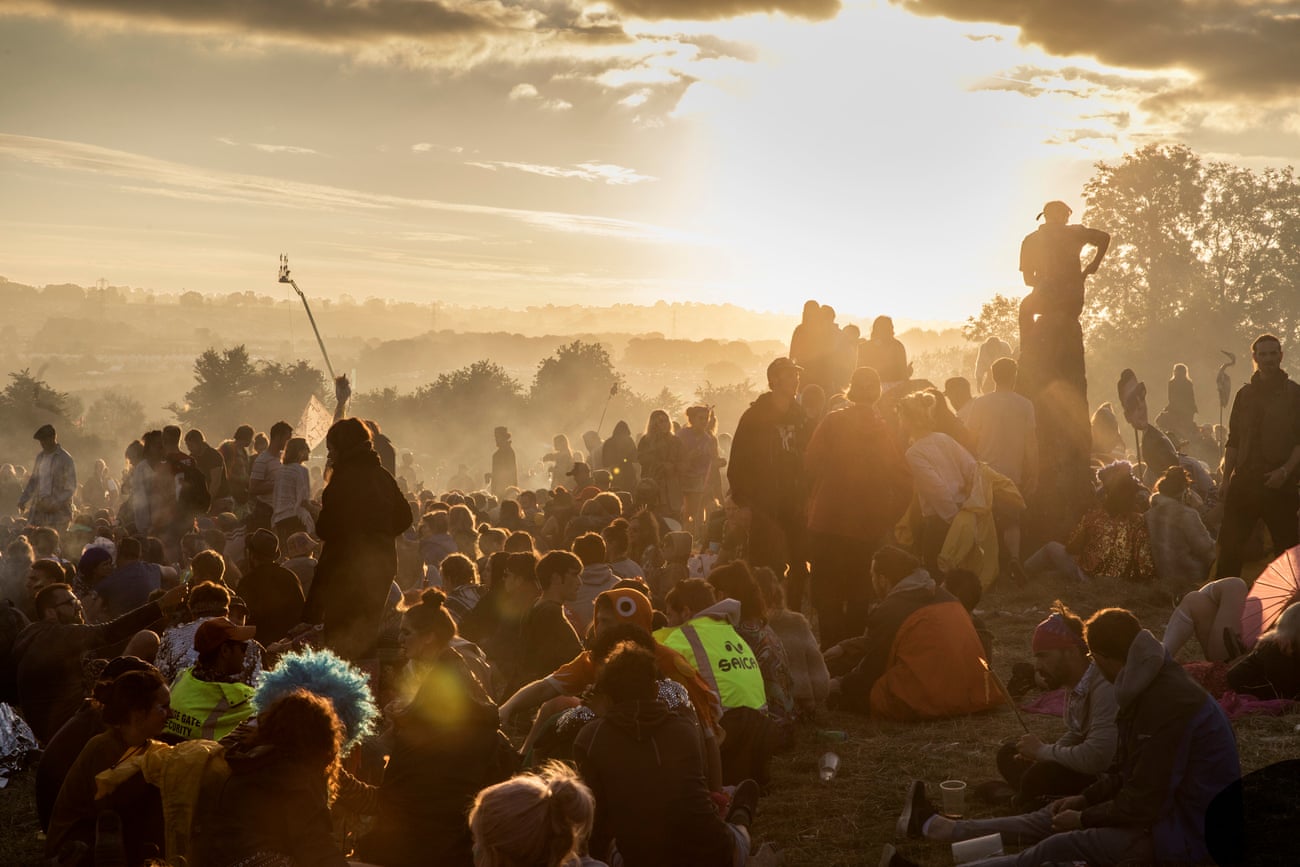 I carried my camera around all night while I was out and about. I’ve seen the Stone Circle before and it’s always amazing. For this dawn moment the light was just unbelievable – the combination of the sun, the cloud and the mist was just brilliant. It was well worth the effort of smashing my camera into my fellow dancers all night to get this. It’s almost impossible not to get dramatic pictures in those sorts of conditions.