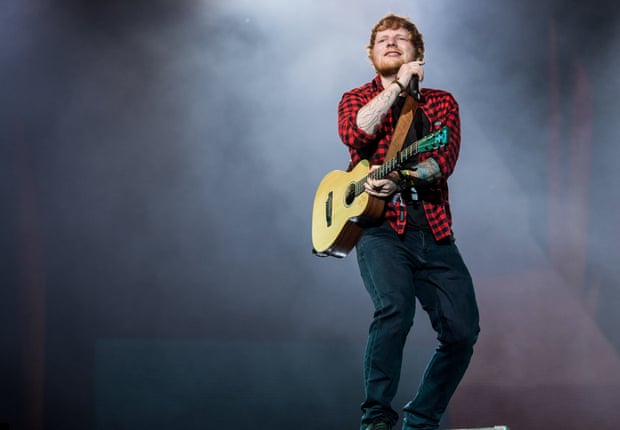 “I have to admit,” offers Ed Sheeran at the start of the weekend’s final Pyramid stage headlining set, “I’m very nervous.” On one level that seems faintly ridiculous – he’s currently one of the biggest pop stars in the world, capable of annexing virtually the entire Top 20 at a stroke. On another you can see why he might approach Glastonbury with a degree of trepidation.

Sheeran is clearly painfully aware that he’s what you might politely call a divisive figure, that for the millions who buy his albums, there’s a legion of people who seem to view him as the absolute apotheosis of everything that’s wrong with music: “I’m going to play a song now that you might not like but I’m pretty sure you know the words to,” he says, introducing the most divisive song of the lot, the huge-selling but widely reviled Galway Girl.

In addition, headlining sets tend to involve artists pulling out all the stops: in the same position last year, Coldplay paid tribute to the late band Viola Beach, brought on Barry Gibb as a special guest and got Michael Eavis up to sing a song. Sheeran has elected to forgo anything like that, unless you count the appearance of a quartet of traditional Irish musicians for one song, which, with the best will in the world, isn’t really the same thing as getting the last surviving Bee Gee on stage to sing Stayin’ Alive. For the vast majority of the set, it’s just him, an acoustic guitar and a loop pedal.

That said, Sheeran is now clearly very well experienced in taking on huge crowds alone – two years ago, he sold out a run of nights at the 90,000-capacity Wembley Stadium. In fact, the guitar and loop pedal set up works very much in his favour: it frequently lends his music a rawness and edge that isn’t there on record.

Understandably, no one ever thinks of Ed Sheeran as someone who deals in mind-blowing sonic overload, but on the live versions of Bloodstream and You Need Me, the constant overdubbing of guitar eventually results in a genuinely thrilling racket, visceral and propulsive. He also has vast reserves of charm on his side – there’s something pretty endearing about watching his nerves dissipate as the set wears on – and an arsenal of songs with which the audience is word perfect: despite the introductory caveat, the scene presented by the audience bellowing along to Galway Girl en masse looks a little like an art installation called The Impotence of Rock Criticism.

Indeed, you’re frequently struck by the sense that if some of Ed Sheeran’s songs were by anyone else, the kind of people who heap opprobrium on them might be queuing up to shower them with praise: the likes of Sing, Don’t, Take It Back – which segues into a cover of Stevie Wonder’s Superstition, then into a cover of Bill Withers’ Ain’t No Sunshine, then back again – and Shape of You. It’s unfair and it clearly rankles with him – “I’ve never had an enemy except the NME, and now I’m selling twice as much as that magazine,” he sings at one point, which these days counts as charming understatement – but the kind of reaction he provokes tonight must presumably come as some consolation.

The audience lift up their phones, creating a sea of lights that stretches as far back as the eye can see, while at another juncture, one of their number decides to express his appreciation by stripping to his underpants and standing on a friend’s shoulders. By the end of the set, Sheeran is casually sitting on the edge of the stage, singing while wrapped in a flag: he doesn’t look much like a man still plagued by self-doubt.