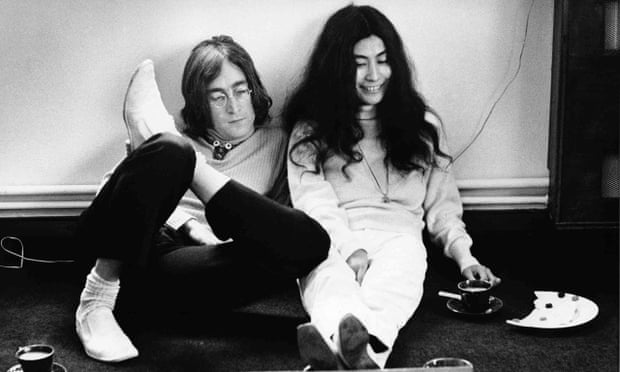 Yoko Ono is being lined up for a songwriting credit on her husband John Lennon’s hit ballad Imagine, 46 years after it was written.

Variety reports that the news was announced at a National Music Publishers Association event in New York, by the association’s CEO, David Israelite. He played a recording of Lennon arguing that Ono deserved a songwriting credit for the 1971 song, because of her inspiration and influence on it. He stated that the process to add her credit, while not yet confirmed, was already under way.

With its affecting, universal message of global understanding set to plangent piano, Imagine, for many people, is the definitive song of Lennon’s post-Beatles career; it reached number one in the UK charts after his murder in 1980. Its lyrics, asking listeners to imagine various scenarios, were inspired by Ono’s poetry collection Grapefruit, which includes a series of similar – if more enigmatic – commands, such as: “Imagine your head filled with pencil leads / Imagine one of them broken.”

In a BBC interview with the couple in 1980, Lennon explains that his failure to credit Ono was due to his being “macho”: “[Imagine] should be credited as a Lennon-Ono song because a lot of it – the lyric and the concept – came from Yoko. But those days I was a bit more selfish, a bit more macho, and I sort of omitted to mention her contribution. But it was right out of Grapefruit, her book.” In a tone that suggests he was embarrassed at his earlier sexism, he says: “If it had been a male, you know – Harry Nilsson’s Old Dirt Road, it’s ‘Lennon-Nilsson’. But when we did [Imagine] I just put ‘Lennon’ because, you know, she’s just the wife and you don’t put her name on, right?”

At the New York event, Ono, accompanied by her son Sean Lennon, accepted the association’s Centennial Song award for Imagine; it was then performed live by Patti Smith.